Dust: when pollution comes from deserts 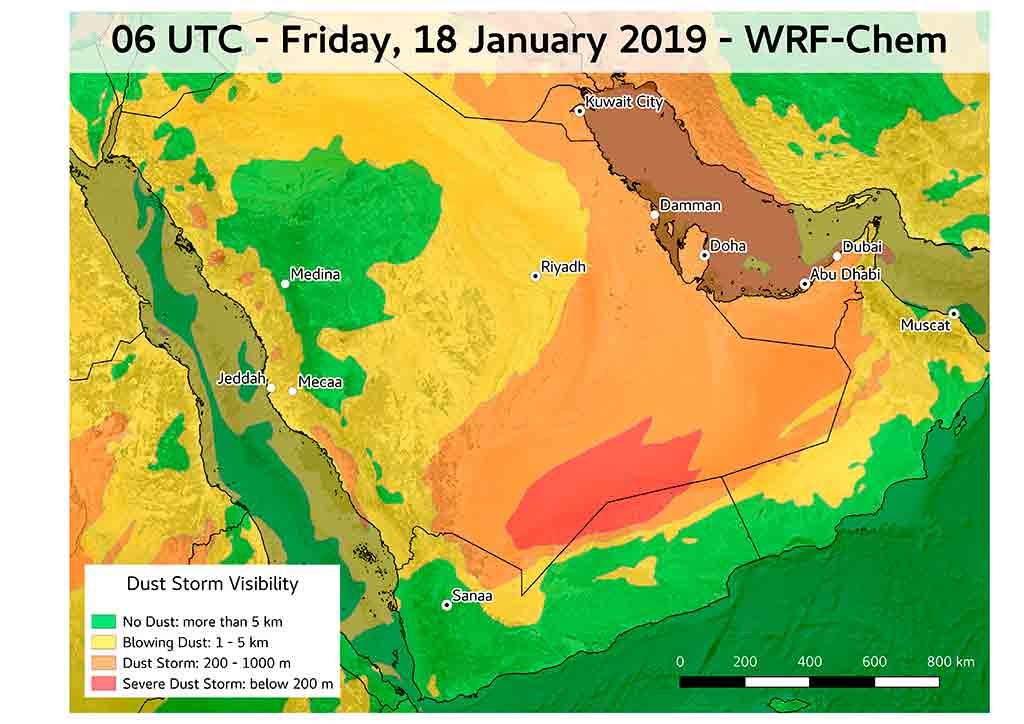 Impact of the dust storm in air quality and mitigation measures.

Visibility due to natural dust forecasted by the WRF-Chem model in the Middle East.

What is natural dust?

When we talk about natural dust, we are referring to a mixture of solid particles that are suspended in the atmosphere, created by the wind blowing on arid and desert surfaces. The size of these particles found in natural dust varies between 1 and 100 µm, which is in the range of the particulate matter known as PM10 and PM2.5 (that is, particulate matter formed with particles, whose diameters are below 10 µm and 2,5 µm respectively). Depending of the density of the material, these particles may travel from a few meters to thousands of kilometers from the original source. Sometimes, under certain meteorological conditions, the amount of suspended particulate matter can be so huge that it causes a significant reduction of visibility, even less than 1000 meters. This severe weather situation is known as dust- or sandstorm.

What is the impact of dust on our health?

Particulate matter in the air has serious consequences on public health. According to studies carried out by the World Health Organization (WHO), the effects due to the continuous exposure to PM10 and PM2.5 goes from aggravation of asthma and other diseases like bronchitis, to an increase in mortality from cardiovascular and respiratory diseases and from lung cancer (‘Health effects of particulate matter, 2013, WHO’). The impact is more remarkable in vulnerable groups such as children, people that suffer from respiratory issues and elderly people. The situation is especially critical in regions such as northern Africa, the Middle East, and countries like China, Mongolia or Australia, whose main cities and economic centers are frequently affected by dust, increasing the concentration of particulate matter and resulting in deterioration of the air quality.

Over the past few years, the population has become more aware of the dangers of pollution and its effects on human health (term known as ecological conscience), with more restrictive new rules place in order to reduce the emissions coming from traffic or industrial activities. Nevertheless, while we wait for new advancements in the field of geoengineering that will require the complete transformation of the huge desert areas of the Earth, the only way to act against the major pollution events caused by natural dust is prevention. Therefore, by identifying the main dust areas, some prevention and mitigation measures may be issued, such as to alert the population to risks from dust, to reduce the emissions coming from other anthropogenic sources or to limit the exposure of the citizens to the outdoors.

Will we ever find a solution to avoid dust storms in the future?

Meteosim, aware of the dust problem, has implemented an air quality forecast system in relation with natural dust, by using the chemical-meteorological model WRF-Chem in the Middle East region, one of the most affected areas from dust. This forecast system allows us to identify major dust pollution events. Therefore, including dust as a radiative forcing improves the meteorological forecast of variables such as temperature. As an example, the event that happened on the 17th and 18th of January of 2019 (see Picture) is shown, when a huge airmass with high a concentration of dust coming from the deserts of the Arabian Peninsula covered Qatar, United Arab Emirates and Saudi Arabia, reducing visibility and increasing pollution levels across the region.