The snowfall of the century 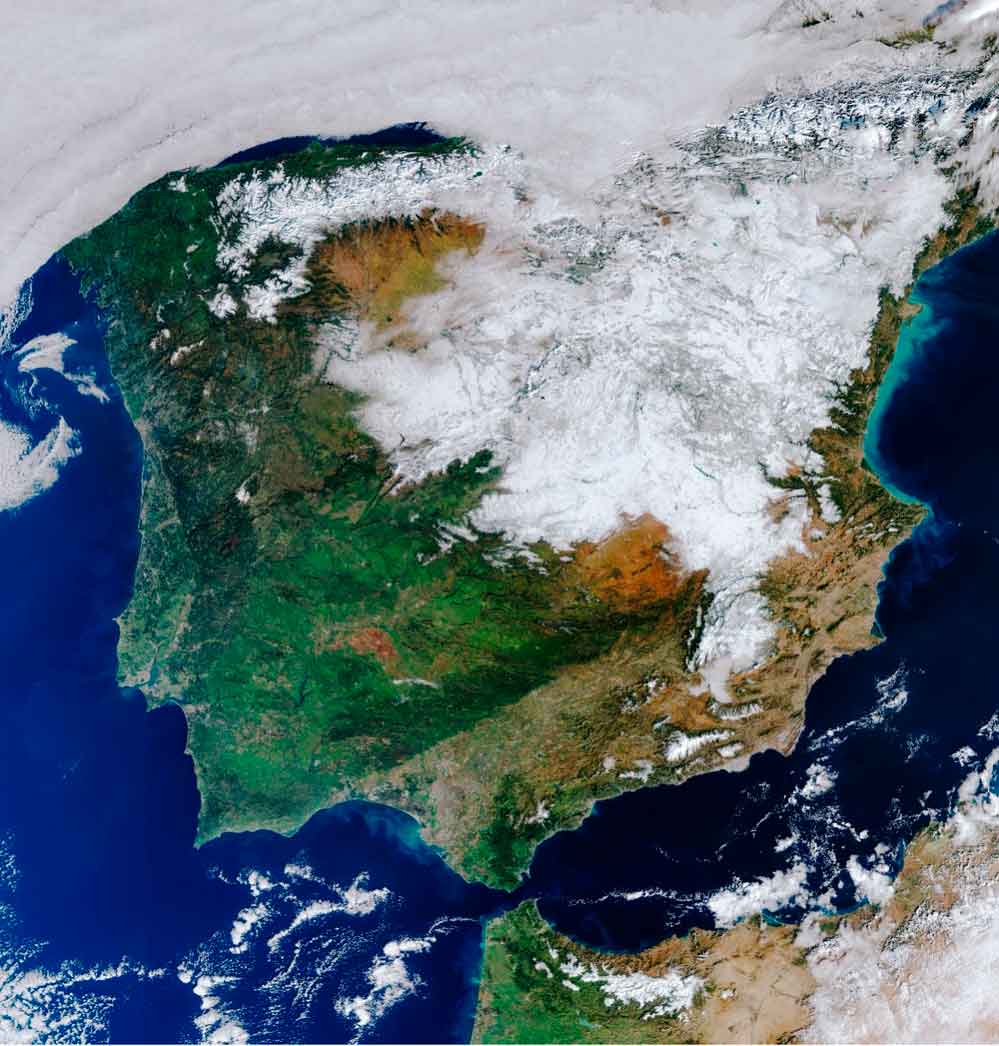 The footprint of ‘Filomena’ that Hortense erased.

Satellite image from the Copernicus Sentinel-3 on the 12th of January 2021, showing the extension of the snow cover over the Iberian Peninsula. Source: European Space Agency https://www.esa.int/

A very busy month of January has just ended regarding the meteorological perspective, which may be well remembered in the ephemeris for many reasons.

To put this information into context, let us remember that the Spanish meteorological agency (AEMET) has participated since 2017 in the Southwest European Group. This is an international program formed by the Portuguese (IPMA), French (Météo-France) and Belgian (RMI) meteorological agencies, whose main objective is the monitoring of the high-impact storms. It means that, year by year, the strongest and more extraordinary low pressures systems circulating in the mid latitudes are named by this group, following an alphabetical list of names. Well then, January 2021 has ended with up to 5 high-impact storms, a record until now, and that have affected several regions of the Spanish territory.

Of all the high-impact storms, perhaps the most famous due to the affected areas and the unusual consequences was ‘Filomena’. ‘Filomena’ was not indeed a significant deep storm, nor was it generated through an explosive cyclogenesis process as announced in other cases by the media. It was the gradual shift from south to north, stablishing a stream of moisture from the subtropical zone, the main reason that leads to frequent and intense rainfalls. These bands of precipitation that were coming from the Atlantic Ocean moves inland over a cold airmass, originated by the continuous polar irruptions occurring during the previous days. The combination of both factors drove to what is known in meteorology as an airmass collidion, that took placed just over the Iberian Peninsula.

What were the consequences? The satellite image from the Copernicus Sentinel-3 of the 12th of January, several days after the hit of the storm ‘Filomena’, show the result: wide areas of the Iberian Peninsula were completely covered by up to 50 cm of snow after the heaviest snowfalls recorded in decades in cities such as Toledo, Madrid, or Zaragoza, with the consequent chaos in these areas that are not used to such as intense snowfalls, more typical in the highlands. That is why the snowstorm was defined as ‘the snowfall of the century’. And even thought the extraordinary character of this event, the main meteorological models were able to forecast it days before and with a level of accuracy that were unthinkable only a few years ago.

Consequences of ‘Filomena’ were visible days after the storm, as the huge snow coverage drove to an anomalous cold wave, classified at the coldest in at least the last 30 years. Low temperatures recorded during the cold wave leaded to almost no melting of the accumulated snow. Only 12 days after this first snowflakes, the storm ‘Gaetan’ pushed over a milder Atlantic airmass, allowing the temperatures to rise, and contributing to the melting of the snow. However, it was a new storm named ‘Hortense’, which came from the Atlantic Ocean only 24 hours later, the one that definitively erased the snowy footprint of ‘Filomena’. Moreover, Hortense left its own footprint, in terms of hurricane force wind gust and large storms with a lightning activity completely unusual in January.

From Meteosim, we are keeping forward in the observation of these events of high impact in our society. By using modelling techniques, we are able to offer meteorological services such as the generation of maps or the emission of meteorological alerts, which allow the users to anticipate these phenomena and to prevent its possible damages.